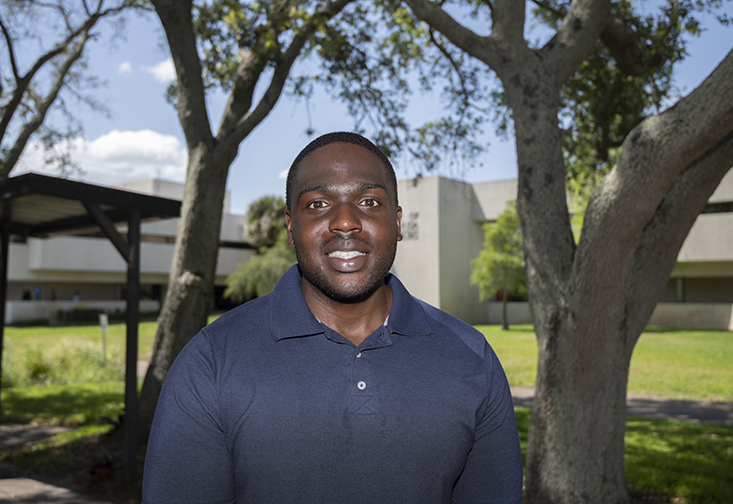 Waiting in the principal’s office for him was Cecil Howard, who was then serving as the campus diversity officer for USF St. Petersburg. And he had an offer that made Morris sit up and take notice.

“He told me I could get a substantial tuition scholarship for all four years if I went to USF St. Petersburg,” recalled Morris, who had been thinking of attending the University of Florida, Duke University or Tulane. “I was in shock. I just knew it was something I couldn’t pass up.”

Morris was one of three high-achieving students selected to participate in the new Emerging Scholars program, an award given to students from Pinellas County schools with outstanding leadership potential that includes a tuition scholarship and mentorship opportunities.

In May, Morris is graduating from the USF St. Petersburg campus with a degree in Economics. He’s planning to take a little time off before taking the LSAT and heading to law school, where he hopes to specialize in either real estate or entertainment law.

For those who have watched Morris grow and thrive at USF’s St. Petersburg campus, it will be especially meaningful to see him cross the stage to collect a diploma.

“It’s almost like a mom seeing your child graduate,” said Michelle Madden, who currently serves as campus diversity officer at USF’s St. Petersburg campus. “Each of the scholars came in as a freshmen. It’s been wonderful seeing them flourish and blossom and go after their dreams. So it's a really proud moment for me.”

The Emerging Scholars program was launched in 2018 with the intent of attracting and retaining outstanding Black male students from Pinellas County. Emerging Scholars are required to register for and maintain full-time student status as a degree-seeking student, remain in good academic standing and complete at least 30 credits a year. As part of the program, the Scholars are connected to mentors who serve as role models and provide guidance, motivation and emotional support.

Morris was paired with Kevin DeLoatch, an officer in the University Police Department, and said he found the mentorship very helpful.

“Having a mentor is a really big advantage, especially during your freshman year when you’re not necessarily as knowledgeable about time management and navigating campus as a college student,” Morris said.

While the Emerging Scholars program provides great benefit to the participants, Madden said the scholars also add a lot to campus life. The ability to attract high-performing students builds a sense of pride among the local community.

“It’s important to the parents and families that these students choose to remain here,” Madden said. “They are brilliant and can go anywhere. So it means a lot that they decided to stay here locally.”

Madden added that there are many other opportunities for scholarship and mentoring at USF’s St. Petersburg campus. She encouraged those interested in learning more to contact her at maddenm@usf.edu.

Morris is currently working at the Rebein Brothers law firm in Tampa and would next like to earn a joint JD/MBA degree. He said he was inspired to pursue a career in law by his uncle, who was a prominent defense attorney in Philadelphia.

“I just remember the care that he put into his clients and his drive to make the community a better place,” he said. “That was something I really respected as I was growing up.”