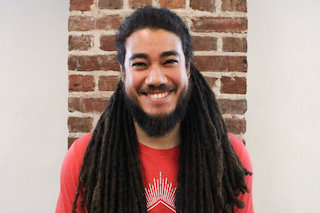 (Jan. 9, 2020) – Twelve years ago, if you’d told Khris Johnson he’d someday be the head brewer at one of St. Petersburg’s best-known breweries, he would have probably laughed before hurrying off to study. Back then, Johnson was a freshman on a pre-med track at USF St. Petersburg, where he was enrolled in chemistry and microbiology courses while working at Bayfront Hospital. Johnson was all but entirely committed to a future in the medical field.

It wasn’t until a few years later that Johnson’s future career began to take shape. After transferring to USF’s Tampa campus to finish his degree, he had an epiphany.

“I realized I didn’t want to go to medical school anymore,” said Johnson, co-founder and head brewer at Green Bench Brewing Company. “I didn’t want to work in the medical industry. I had a bit of a personal crisis trying to figure out what I wanted to do.”

Wrestling with uncertainty, Johnson changed his major to English literature, took a second job and picked up a new hobby, home brewing.

“I really started to get into beer at that point,” said Johnson, who also serves as a founding faculty member of USF St. Petersburg’s Brewing Arts Program.

Not long after he landed his first job in the industry with Tampa’s Cigar City Brewing, Johnson started winning awards. First it was for his IPA. Then for his red ale. Then an American stout and sour. Johnson wasn’t just regular at beer competitions around the state—he often returned home a champion.

Breweries around Tampa Bay began taking notice and Johnson started to receive offers to join their operations. He took a position at Southern Brewing and Winemaking in Tampa before deciding to launch his own business. Over the next couple years, Johnson wrote a few business plans and pitched local investors, but couldn’t seem to get his idea off the ground.

“Brewery businesses are fairly capital-intensive projects,” Johnson said. “Getting funding was pretty difficult early on. And it can be difficult to find the right partners.”

A mutual friend eventually introduced Johnson to Nathan Stonecipher and Steven Duffy, St. Petersburg locals who shared Johnson’s dream of opening a craft brewery. From there it was an uphill battle that included convincing local lawmakers to change St. Petersburg’s zoning laws, but the three business partners finally settled on a location just west of downtown, opening the Green Bench brewery and tasting room to the public in September 2013.

Today, Green Bench has some 30 employees and distributes through about 17 wholesalers around Florida. And the business is expanding. Early last year, it opened a second tasting room, Webb’s City Cellar, adjacent to the original. Loaded with oak casks piled high, Webb’s lets Johnson and his team experiment with various fermentation and aging processes.

Beer sometimes gets a bad rap as a barbaric libation, but brewing is both an art and a science that requires a fair bit of knowledge about chemistry and microbiology—two courses Johnson took while enrolled at USF St. Petersburg. Still, after all these years, he admits he has a lot to learn.

“I’ll die never knowing everything there is to know about beer,” he said. “It’s too complicated as a product.”

Now, as a faculty member in the Brewing Arts Program, Johnson credits his role as instructor for helping keep his finger on the pulse of the latest developments in brewing.

“Beer is ever changing,” he said. “We’re always learning something new. Every semester that I get to teach students about beer, I also get to continue researching beer.”

Twelve years ago, Johnson envisioned himself on a radically different career path. But today, he wakes up excited about work and takes pride in the role he’s played in his hometown community.

“Opening a business in St. Petersburg has been important to me,” he said. “When I was at USF St. Pete, there were not many businesses around where Green Bench currently is. Being from St. Petersburg, there’s a lot of personal value and pride I put into having helped open a business here. I think we’ve helped contribute to the revitalization in downtown and growth in the city. Hopefully a lot more students decide to go to school in St. Petersburg because, honestly, St. Pete’s a fun place to live and hang out.”

He added, “Going to school here, opening a business and then being able to contribute again by working at the school that I went to—that’s pretty rad.”